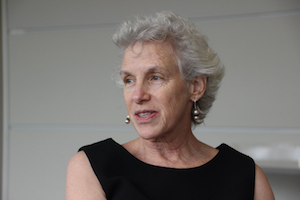 In November 2016 – At the time of the US elections which resulted in the election of President Donald Trump, the Harvard Business Review -  posted what would become its most popular piece ever, read by over 3.5 million people. That article was “What So Many People Don’t Get About the U.S. Working Class” by law professor Joan Williams. Anne Marie Slaughter called it “a post-election manual for understanding Trump voters” and Dan Rather exhorted his followers to “check it out”.

In White Working Class: Overcoming Class Cluelessness in America (Harvard Business Review Press – on sale at the event)  Williams expands on her article, offering a primer explaining in plain language why so much of the elite’s analysis of the white working class is misguided, and is rooted in assumptions that she argues can only be called class cluelessness. “When you leave nearly three‐fourths of Americans without college degrees out of your vision of the good life, they notice,” she writes. “We simply cannot continue to dismiss or deride working class whites; it is neither morally acceptable nor sound political strategy.”

Williams explains how most analysts, and the corresponding media coverage, have conflated “working class” with “poor.” All too often, white working class motivations have been dismissed as simply racism or xenophobia. This demographic often resents both the poor and the professionals; they don’t, however, tend to resent the truly rich, nor are they particularly bothered by income inequality. Their dream is not to join the upper middle class, with its different culture, but to stay true to their own values in their own communities—just with more money.

Recent elections in Europe in Germany and Italy have seen an important rise in the populist view and in an article for the Financial Times, Williams drew parallels between the US and UK: “Both the UK referendum result and Mr Trump’s triumph were, among other things, cris de coeur by working-class whites who feel abandoned by professional and business elites.” says Williams. “Both votes were fuelled by elites deeply bonded with the plight of refugees but unconcerned with their own country-folk whose lives and livelihoods have been upended byglobalisation.”

White Working Class is a blunt, bracing narrative providing a nuanced portrait of millions of people who have proven to be a potent political force. For anyone stunned by the rise of populist movements, wondering why so many would seemingly vote against their own economic interests or feel like strangers in their own land, White Working Class provides a new understanding of crucial set of workers and, as such, provides crucial insights for the corporate world.

Joan C. Williams is Distinguished Professor of Law, University of California Hastings Foundation Chair, and the Founding Director of the Center for WorkLife Law at University of California Hastings College of the Law. Described by The New York Times as having “something approaching rock-star status”, Williams has played a central role in documenting how work-family conflict affects working-class families and in reshaping the debates over women’s advancement for the past quarter-century. She lives in San Francisco, CA.

The book will be available for sale at this event and the author will be signing copies bought during the evening.