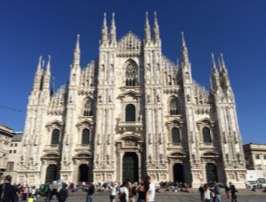 We're delighted to share the news that Davide Serra*, founder of Algebris Investments, has confirmed the meeting with our group on MONDAY, March 7th. We would like to thank Wharton alum, Stefano Iamoni, and his firm, Consilium SGR, for having organized the meeting together with The Boston Consulting Group.

BCG will host our meeting in its (brand new!) Milan office, Via Ugo Foscolo 1, attached to Galleria Vittorio Emanuele. Registration begins at 6:30 pm and Davide will start his talk at 7:00 pm.

Priority for participation at this event will be for Wharton/Penn alums and their guests (a family member, work colleague, or friend). Each alum can bring 2 guests. If you have a larger group in mind, please contact us ASAP on [email protected]

Registration will be on a first come-first served basis. If you're coming with or without a guest, please provide us names and affiliation when you RSVP on [email protected]

The event will coincide with our monthly aperitivo and we're sure that you'll agree that it's a great alternative to the usual get-together.

* Davide Serra is Founding Partner and CEO of Algebris. Previously he was a leading Managing Director at Morgan Stanley where he headed the European Banks Research Team and was the Global Banks team coordinator. Davide was rated individually among the top European banks analysts for the period 1999-2006. Prior to Morgan Stanley, Davide worked in the top rated UBS Banks research team as a senior analyst (1995-2000).

Davide has been awarded the Young Global Leader designation by the World Economic Forum and is recognzed as a leading expert on financial services. He is often consulted by the Central Bankers and Regulators on policy matters and regularly contributes to the discourse on financial reform. Furthermore, Davide has been awarded the Commander designation, a decoration of the Order of Merit of the Italian Republic, by decree of the President of the Italian Republic, on a proposal from the Italian Prime Minister.

He is Chairman and Trustee of the Hakuna Matata foundation, a registered UK charity which he founded with his wife in April 2010. The primary focus of the foundation’s work is assisting orphaned children in Central Tanzania; www.hakunamatata-charity.org

Davide is a graduate of Bocconi University and holds a Master CEMS. He played volleyball professionally in Italy from 1985 and 1990, reaching Series A1. He enjoys climbing and off-piste skiing in the Alps and mountains around the world.